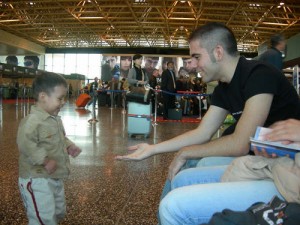 Recent travel brought forth some interesting lessons in management.

As passengers gathered near the gate to board our flight, I saw a father sharply scold his young son who seemed more interested in looking out the window at the big planes than getting in a bustling line. He was shocked by his dad’s flare of temper and the sudden scolding, not realizing that he had done anything wrong. In fact, from his point of view he had not committed any offense. He simply was not on board with Dad’s plan. It was only a matter of moments before he started crying. Actually, it was more like wailing. I prayed our seats would be far apart.

My intent is not to condemn the father. I can sympathize with him. Travel is stressful, and even more so with young ones. His behavior was understandable, and, in my experience of watching parents and children, typical. Unfortunately, it was not effective if his goal was to maintain harmony and good spirits.

On the return trip I observed an entirely different approach to parenting, also around boarding time. A little girl was fascinated by the looks and sounds of people, concession stands and neon signs. As boarding time approached, her mother got down on a knee so she was eye to eye with her daughter. I didn’t catch all the words – I try to be subtle when I’m eaves dropping. But the gist of her dialogue was explaining to the little girl what was going to happen next. They would join the line to get on the plane – “and we’ll be among the first in line. Won’t that be cool?!” Then there will be the finding of seats, and mommie might need your help. Pretty soon after that we will drive down the runway and then lift off. That’s when we’ll be really flying. Then they’ll come around to offer us a snack and soda, so be thinking about what you might like to drink.

The little girl gladly gave up her preoccupation with the airport sights and sounds so she could join this exciting new adventure. I decided I wouldn’t mind sitting near this parent-child team.

There could be many factors accounting for the two different parenting scenarios. We all know that some kids are easier to “manage” than others. The temperaments or circumstances of the parents might also have played a role. But putting those elements aside, what I found most compelling, and most transferable to management, was how the second parent took time to explain things to her daughter. It was not a story of convincing the little girl to do what mommie wanted, but rather she told the girl a story about a compelling future that easily aroused the girl’s interest and enthusiastic followership. Perhaps just as important, the parent began the conversation by getting on her daughter’s level, in effect seeing the world through her daughter’s eyes.

Adults, like children, make up stories about the information presented to them. Anyone, adult or child, confronted with sudden unfavorable conditions for apparently random or whimsical reasons, will naturally feel upset, shocked, hurt or angry. But if such adverse events are placed in the context of dialogue that helps the adult or child understand the current situation and see a possibility for a promising future, the reaction will usually be far more agreeable.

Because managers are overwhelmed by many demands on their time, one of the things they tend to sacrifice is quality time with direct reports. I’m not saying managers need to spend hours each week relating to and bonding with employees. All it takes is a few well-chosen, intentional minutes per day letting people know what’s going on, finding out what’s happening in their worlds, listening, sharing, coaching and clarifying. All of this goes a long way toward helping them connect their work lives with the goals and performance of the company. It has them feeling listened-to and cared about. It has them less surprised or alienated by crises when they occur.

Such small investments of time can be the difference between smooth sailing and mutiny.

One Response to Parents, Planes & Management

Leave a Reply to Jack Hayhow