I was sitting in a coffee shop recently trying to write a blog post. It wasn’t happening.

Then a couple sat down nearby. I could not help but overhear some of their conversation. Seems they have a middle school son who is shaping up as a bit of a slacker. All he wants to do is play video games. He’s not doing his school work, he avoids his simple chores like making his bed, and he has shown no interest in extra-curricular activities at school.

The father was pretty worked up about the situation. He was talking about carrots, and even more about sticks. He talked about rules, guidelines and other structures that might help eradicate his son’s bad habits and replace them with good ones.

Mom, on the other hand, openly declared that she was concerned but not alarmed. She agreed that they could and should explore some avenues to improve the behaviors, but she was more of the view that her son was just going through a phase and would work his way out of it.

The conversation went on for some time. What struck me most was not the content of the dialogue, but rather, the mutual friendly and concerned tone. I can so easily imagine other situations where two adults would escalate the heat of the conversation, becoming increasingly defensive and/or increasingly aggressive about their differences of opinion. Maybe one would steamroll the other into capitulation and acquiescence.

A take-no-prisoners, give-no-quarter approach dominates our competitive culture where the loudest, most insistent voices seem to win – at least when it comes to talk radio and cable news.

But this couple did not pursue their difference with conventional win-at-all costs ideology. To the contrary, at one point I heard the mother say something like, “Although I’m not as worried about this as you are, I am curious about why you feel the way you feel.” A bit later she asked her husband what he was like when he was 13 years old. Still later she really won me over by saying, “Even though I’m not worried about this like you are, I will support whatever you want to do.”

The husband, for his part, did not try to convince his wife that she was wrong and he was right. He didn’t get louder or more insistent. He listened to her. He addressed her questions thoughtfully. He seemed grateful to be able to express himself fully without it turning into a tug-of-war.

Let’s look at a parallel conversation in the business world. One of my clients is a director, and one of her employees, a manager, has been on loan to a senior VP. When it came time for the company’s managers to provide preliminary ratings on their direct reports, my client gave her manager grades of As, Bs and Cs on various performance goals and attributes. Her evaluation was based on both firsthand observations and comments, sometimes complaints, from others in the organization. After submitting her rating through channels, it was bounced back to her. The SVP wanted the report card to read straight As. When she sought an audience to compare and contrast their different perspectives, the message was unambiguous: there is no debate; change the ratings.

What is the impact of this style of dialogue, or better put, lack of dialogue? First, the director feels disempowered and alienated. Second, she has already been approached by colleagues who learned of the top grades assigned to her manager. (It’s hard to keep a secret in any company!) They were steamed and blamed her, placing her in the difficult position of either accepting their scorn or throwing her boss under the bus. Third, and perhaps most unfortunate, a precedent has been set or reinforced that holds a VP’s opinion as sacrosanct.

Unfortunately, this director’s experience was not unusual; in fact it is probably the norm in most companies to accept without question the authority of the higher ranking executive.

Engaging in true two-way dialogue is not easy. It takes time. It goes against our competitive, litigious, right-wrong cultural sensibilities. It requires that we have BOTH the confidence of our own convictions AND the willingness to tolerate, even embrace, conflicting or alternative views. It requires that we set aside our ideas of power and politics and engage in true collaboration.

It’s not easy, it’s not common, but oh what a difference it can make. 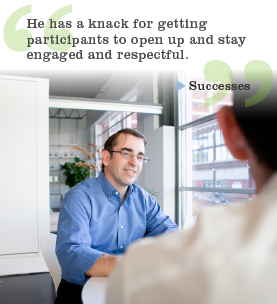